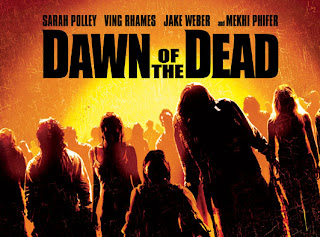 Packed with more blood, more gore, and more bone-chilling, jaw-dropping thrills, Dawn of the Dead Unrated Director's Cut is the version too terrifying to be shown in theaters! Starring Mekhi Phifer, Ving Rhames and Sarah Polley in an edgy, electrifying thrill-ride.

When a mysterious virus turns people into mindless, flesh-eating zombies, a handful of survivors wage a desperate, last-stand battle to stay alive…and human.

I love this movie. I love the original, too, but this version is most definitely my favorite and possibly my favorite zombie movie of all time. If you want to get a first hand look at the slow-moving zombie vs. fast-moving zombie comparison, you should watch the original DOTD and then turn around and follow it with this incredible remake.

I am a slow zombie purist, but I do think fast zombies are way scarier, especially when they are in the guise of the cute little neighbor girl. Geez, it gives me the willies just thinking about it. Not so scary is the fact that Jake Weber is in this one. He normally plays the husband on Medium, but in DOTD, he's just a totally dreamy guy trying to fight of flesh-eating hordes. Ahhhh, Jake Weber.

If you don't like gore, I would stay away from.....well, basically all zombie movies. Gore sort of goes hand in hand with the genre. 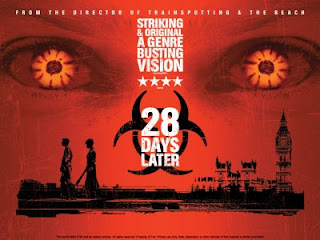 Hailed as the most frightening film since The Exorcist, acclaimed Director Danny Boyle's visionary take on zombie horror "isn't just scary…it's absolutely terrifying" (Access Hollywood).
An infirmary patient awakens from a coma to an empty room…in a vacant hospital…in a deserted city. A powerful virus, which locks victims into a permanent state of murderous rage, has transformed the world around him into a seemingly desolate wasteland. Now a handful of survivors must fight to stay alive, unaware that the worst is yet to come…

This is another one of my favorites. Although in this one, people are infected with rage, so they aren't your classic zombies. Still scary, though, oh yes, very scary.
And this movie is directed by Danny Boyle of Trainspotting and Shallow Grave fame. He's one of my favorite directors and Cillian Murphy is positively lovely, while trying to run for his life.


So there's a little slice of my zombie movie faves. I'll post a few more favorites this week as well. Tomorrow, come back for a new promotion where you can win an 8 book prize pack of James Patterson's YA books. Not zombies, but still pretty cool.
Posted by Carrie at 8:15 PM