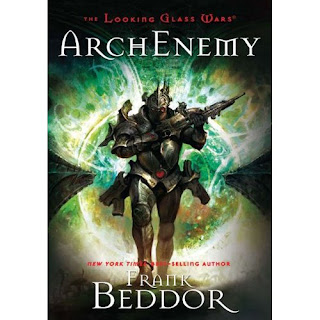 As SEEING REDD ended, King Arch had been successful in sapping Wonderland - including Alyss and Redd - of Imagination. Now the two enemy queens are forced to come together in an attempt to reclaim Wonderland and their imaginative powers. Hatter M is AWOL as he escorts his daughter, Molly, to our world, leaving her in the care of Charles Dodgson (aka Lewis Carroll). It appears that the caterpillar oracles are in cahoots with Arch, but we learn they are manipulating him to save the Heart Crystal, also know as 'Everqueen"--the source of imaginative power. How far will Alyss regain her power?

I love, love, love this series. I've always been an Alice in Wonderland fan, but this series takes that beloved classic and turns it on its head. It's fresh and exciting and I cannot wait for this one.

Unfortunately, it's not out until October, so I have a long wait ahead of me.

As always, Waiting on Wednesday is brought to you by Jill over at Breaking the Spine.

I saw The Hangover tonight and it was hilarious. I thought my sister was going to hyperventilate from laughing so much. She did that snort laugh thing, which was funny just by itself. Great movie!!
Posted by Carrie at 10:43 PM