Gifted Book 1: Out of Sight, Out of Mind by Marilyn Kaye 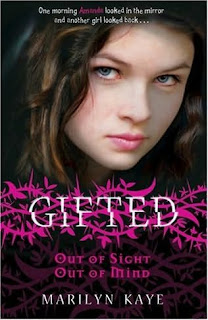 Queen of Mean Amanda Beeson, 13, gets the shock of her life when she wakes up one morning to find herself in the body of one of her victims, Tracey Devon. Amanda discovers that Tracey, ignored at home and school, has the ability to become invisible. When Amanda finds herself in a special class that Tracey usually attends, it becomes clear that at Meadowbrook Middle School the definition of “gifted” has a whole other meaning. Can Amanda rescue her one-time target from obscurity and get her own life back on track? In order to do so, she will have to reveal her own startling gift and take her rightful place among Meadowbrook’s very secret clique.

When these were offered to me for review, I pretty much jumped at the chance. The covers are very cool and the story sounded really interesting to me as well. I'm glad I accepted them, because I really enjoyed reading this one.

It's weird that reading this coincided with my Degrassi obsession, because Amanda Beeson totally made me think of Paige on the show. She's such a queen bee and really quite a bitch, but there are secret layers beneath Amanda's harsh exterior. There's a reason why she has a heart of stone.

When she wakes up in Tracey's body, Amanda is at first horrified to be stuck inside such a plain jane. Of course, after literally walking a few in Tracey's shoes, Amanda starts to see things a little differently. She also ends up in Tracey's class for the "gifted," and when I say gifted, I mean gifted. Mind readers, telekenetics, seers, the gang's all there and Amanda is forced to look at herself and her powers in a whole new way. She also forms a new if somewhat strained friendship with Jenna, the grumpy goth girl, who is trying to get Tracey back where she belongs.

This was a fun, quick read full of characters that I definitely want to know more about. One thing I liked was that Amanda's character doesn't suddenly become the nicest girl in the school just because she experiences Tracey's life for while. She's still a little snot, but there's always hope for the future. The second book is all about Jenna, who is full of acerbic wit and pure angst, which means she's my fave, of course. I'll be reviewing it in a day or two, so come back for that one.

I think there are nine books planned in the series; one for each kid in the gifted class. I look forward to reading the rest of them and to Marilyn's fall release, Demon Chick, which looks fantastic.

If you'd like to see a pretty cool little trailer for Gifted there's one currently rolling on Amazon and you can check it out here.
Posted by Carrie at 9:39 PM