As always, In My Mailbox is brought to you by the genius that it The Story Siren. It's my favorite part of every week, because I get to see what everyone picked up throughout the week. There's always lots of new titles to add to my ever-growing wish list.

This week I received 6 new books for review, so let's get to it shall we?

Biology is not Dree's thing. Equally heinous are English, social studies, her sister and mother, not to mention Edmonton in general. Toronto's upcoming Renegade Craft Fair is where she belongs.

On her 15th birthday, she will get the special fund her father promised, and the day after that she'll be on Westjet Flight 233 to Toronto. Instead, her dad has a fatal heart attack, and all she finds are clues leading to the ominous Alberta Psychiatric Hospital where her parents once worked. As Dree tries to unearth a mystery, and still pass science, she keeps searching for the money, and for a way to grieve her father.

Told in a fresh, frank voice, The Mitochondrial Curiosities of Marcels 1 to 19 is a wry, adventurous, unflinching look at the trials of teenage life.

This one came from Coach House Books in Toronto. It sounds like an interesting read and I'm really looking forward to it.

The Birthing House by Christopher Ransom 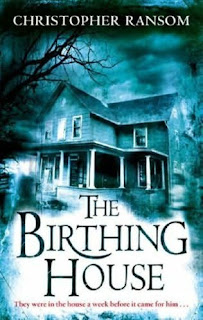 When Conrad Harrison impulse-buys a big old house in Wisconsin, his wife Jo doesn’t share his enthusiasm, reluctant at the idea of leaving their LA life - so Conrad is left to set up their new home as she ties up loose ends at work. But Conrad’s new purchase is not all that it seems. Soon Conrad is hearing the ghostly wailing of a baby in the night, seeing blood on the floor and being haunted by a woman who looks exactly like Jo. With his wife away, Conrad becomes obsessed by the pregnant girl next door, Nadia, who claims to be a victim of the evil in the house. The crying leads him to a bricked-up body, and the mystery of the Birthing House unravels, pulling in Jo, Nadia and leading Conrad to a nightmarish conclusion…

I actually picked this one up at work, but it sounds awesome and pretty freaky. Can't wait!! 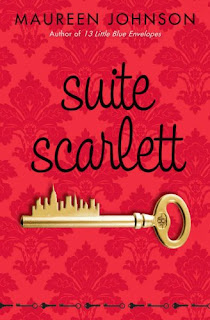 Scarlett Martin has grown up in a most unusual way. Her family owns the Hopewell, a small hotel in the heart of New York City, and Scarlett lives there with her four siblings - Spencer, Lola, and Marlene.


When each of the Martins turns fifteen, they are expected to take over the care of a suite in the once elegant, now shabby Art Deco hotel. For Scarlett's fifteenth birthday, she gets both a room called the Empire Suite, and a permanent guest called Mrs. Amberson.

Scarlett doesn't quite know what to make of this C-list starlet, world traveler, and aspiring autobiographer who wants to take over her life. And when she meets Eric, an astonishingly gorgeous actor who has just moved to the city, her summer takes a second unexpected turn.

Before the summer is over, Scarlett will have to survive a whirlwind of thievery, Broadway glamour, romantic missteps, and theatrical deceptions. But in the city where anything can happen, she just might be able to pull it off.

I'm a Maureen Johnson fan, but I haven't read this one yet. I was psyched to receive it in the mail. Also, I'll be hosting a contest for this title next week, so be sure to check back on the 22nd for all the info.

The Sweetheart of Prosper County by Jill Alexander

Almost-15-year-old Austin Gray is tired of standing at the curb and watching the parade pass her by. Literally. She decides this is the year she’ll ride on the hood of a shiny pickup truck in the annual parade, waving to the crowd and finally showing the town bully that she’s got what it takes to be the Sweetheart of Prosper County.

But far from simply being a beauty contest, becoming Sweetheart involves participation in the Future Farmers of America (FFA), raising an animal, and hunting or fishing. Austin will do almost anything to become Sweetheart, and has the support of her oldest friend, Maribel, her new FFA friends (including the reigning Sweetheart, and a quiet, cute cowboy), an evangelical Elvis impersonator, a mysterious Cajun outcast, and a rooster named Charles Dickens. If only her momma would stop overprotecting her, and start letting Austin live her own life. But Austin can’t move on until Momma moves on, too—and lets the grief of losing Austin’s daddy several years before out into the open.

Here is a bighearted story that will leave readers agreeing with Austin that sometimes, it’s not what you ride, it’s how you roll.

I want to thank Jill for sending me an awesome autographed ARC. It was very sweet of you and I'm looking forward to reading the book. 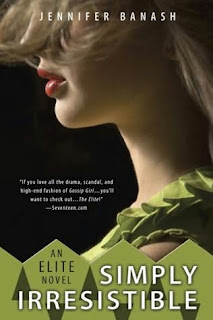 Small-town girl turned Big Apple beauty, Casey McCloy is really beginning to enjoy the high life in her high rise. She’s climbing the social ladder, to the dismay of her neighbor and rival, Madison Macallister. And Casey could end up as popular as Madison now that the two are set to star in their own reality show, “De-Luxe.” But reality TV can be so unreal…

Madison loves the attention, but having every bit of her life caught on tape is often less than glamorous. Yet fame comes at a price—and she’s willing to pay. Meanwhile, now that Casey and her almost-boyfriend Drew Van Allen are currently more off than on, she’s beginning to wonder if everything in her life is just an illusion—and how much longer the illusion can last.

This is the third book in the Elite series. I've read the first one and loved it, so I really need to get with it and read the second and third.

Once a Witch by Carolyn MacCullough Tamsin Greene comes from a long line of witches, and she was supposed to be one of the most Talented among them. But Tamsin's magic never showed up. Now seventeen, Tamsin attends boarding school in Manhattan, far from her family. But when a handsome young professor mistakes her for her very Talented sister, Tamsin agrees to find a lost family heirloom for him. The search—and the stranger—will prove to be more sinister than they first appeared, ultimately sending Tamsin on a treasure hunt through time that will unlock the secret of her true identity, unearth the sins of her family, and unleash a power so vengeful that it could destroy them all. This is a spellbinding display of storytelling that will exhilarate, enthrall, and thoroughly enchant.

I've been anxiously awaiting this one and I want to thank Carolyn for making it happen. It looks fantastic and it's definitely moving up in my TBR pile.

So, there you have it. That's my week in books. Can't wait to see what everyone else got.
Posted by Carrie at 8:55 PM