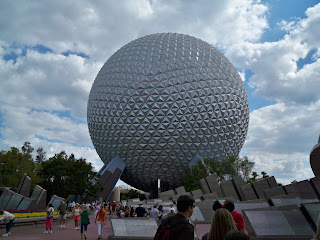 So, anyone who's been reading my blog for awhile knows that I am a Disney theme park junkie. I go to Disneyworld at least once a year and even though I went in March, I am already trying to find a way to return very soon. Oh why can't I win the lottery?!

Okay, I love everything Disney, and what could be better than a series of books that take place inside the parks. Enter Ridley Pearson and his amazing Kingdom Keepers series. Needless to say, when I was tooling around the Internet the other night, I was thrilled to see that book three is on it's way. Here's the info:

Release Date: April 27, 2010 (I've heard earlier dates, but this is the Amazon date listed) from Hyperion Children's Books (No cover, so I've included my own view of Epcot from my March trip).

When Disney Imagineers installed hologram guides for the Magic Kingdom, using teenage models they had no idea the technology might backfire. But backfire it did: some nights when the kids go to sleep, they wake up in one of the Disney parks as a hologram.

With the adventures set forth in the first books now behind them, Kingdom Keepers 3: Disney In Shadow follows the five teens, Finn, Philby, Willa, Charlene, and Maybeck as they search to find Wayne, their mentor and head Imagineer who has mysteriously gone missing. Concerned Wayne has been abducted by the Overtakers-Disney villains, who along with other Disney characters, take over the parks when the turnstiles stop spinning, and want desperately to steer the parks to a far darker place-the five kids pick up a major clue from a close friend, Jez, whose dreams (nightmares, really) often accurately predict the future.

The very few clues from Jez's dream lead the kids into Disney's Hollywood Studios and Epcot--through imaginary worlds that become real, by imaginary kids who are real. Each clue seems tied to the last, and with the stakes growing ever higher, what starts out as a puzzle ends up as a fight for their lives. Through a transparent paper box, a quest for a sword, rides on Soarin' and Maelstrom, life-and-death encounters with giant snakes, and a devious Maleficent, the Kingdom Keepers not only begin to decipher deeper meanings to the clues, but discover new truths about themselves and their ever-growing friendships.

There you have it. I am very excited, especially since this one takes the kids to Epcot, which is quickly becoming my favorite of the four Florida parks. Woo hoo!! Hey folks at Hyperion, please feel free to send me a copy if you'd like. Begging works right?!

As always, Waiting on Wednesday is brought to you by Jill over at Breaking the Spine. 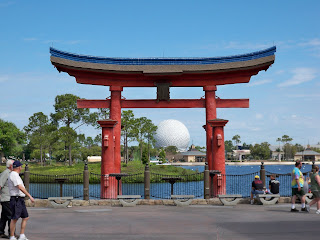