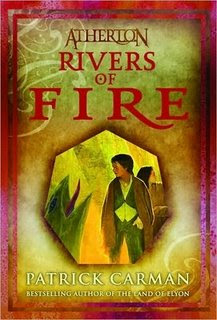 In bestselling author Patrick Carman's rich and riveting follow-up to The House of Power, an extraordinary world meets its destiny in an epic and unforgettable rebirth.

The world of Atherton has collapsed and the three levels have become one. Humans and monsters, once separated by vast cliffs, now roam the surface of Atherton together. The inside of Atherton--where the most troubling secrets are hidden--has been breached. While Edgar embarks on a life-or-death quest to find Atherton's mad maker, his two friends, Samuel and Isabel, venture through dangerous underground realms, confronting deadly cave dwellers, rivers of fire, and waters of life.

Atherton is not what it seems at all, but something far more dangerous, with a history locked inside the mind of a madman and a future beyond Edgar's wildest imagining.

I love Patrick Carman. I discovered him a few years ago when he released The Dark Hills Divide, which is the first book in his Land of Elyon series. The Elyon books are fantastic and I highly recommend them.

Atherton is his second series, which revolves around a world that is made up of three vastly different levels: the Flatlands is the bottom level and is basically a desert populated only by some very nasty creatures, the second level is Tabletop where most of the inhabitants of Atheron live and it's basically an agricultural area in which all of the products of Atherton are grown and raised, and lastly, is the Highlands where the rich folks live. In the Highlands, they basically consume all of the product created through the hard work of those in Tabletop. It's almost like a serfdom.

Anyone, in book one, changes come to Atherton. The levels start to drop, anarchy ensues and by the end, Atherton rests at all one level, but what's to stop it from dropping further? Basically in this one, more changes are happening and it's up to three children to try to save Atherton and it's people.

The Atherton books, at least the first two, are great. They are for slightly younger readers, but I think anyone who likes a great adventure story would really dig them. The characters are wonderful and their personalities vary so greatly that you get to know each and every one of them and you can't help but cheer, or in some cases boo, them.

There's also an ecological message in the books. Atherton was created to escape The Dark Planet, which is basically Earth. The planet was dying and Atherton was one scientists last ditch effort to save humanity.

So, it may seem like I'm giving a lot away here, but trust me I'm not. These stories are very rich and are filled with an incredible amount of detail that really pulls you into the story. Also there are some truly fabulous illustrations throughout the book.

I will continue to read Patrick Carman, probably forever. He has yet to disappoint me. I have a copy of the third book, which I will be reading soon and I also have a copy of the first book in his third series, Skeleton Creek, which I still need to read. So, this isn't the last time I'll be mentioning Carman on this site. Go check him out!!
Posted by Carrie at 9:49 PM