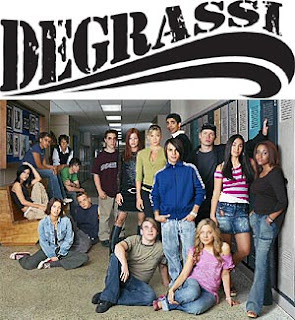 I'm actually old enough to remember the original Degrassi Jr. High from way back in those day-glo filled eighties. Granted I was a little younger than those Jr. High kids, but I still loved it.

I've seen a few episodes of Degrassi: The Next Generation through the years, but I never paid much attention. Well....I was home the other day and apparently The N has been running marathons in preparation for the new season in July. So, basically, I'm hooked. I've watched like two whole seasons already and my DVR is filled with episodes.

What is so appealing about these crazy Canadian teens?! I have no idea. Maybe it's the fact that they address serious issues, which American teen shows might shy away from, with honesty and grace. Or maybe it's just that I like hearing them say things like oot or aboot (love those accents).

No matter the reasoning behind it, I am currently lost in all the drama of Paige, Emma, Manny, Marco, et al. It's a guilty pleasure, what can I say?!
Posted by Carrie at 11:34 PM