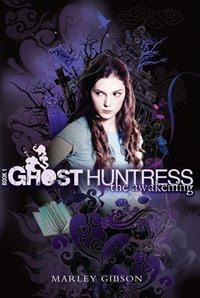 The first in a trilogy. Get out your tape recorders, crystals, and extra batteries— you’re about to go where our world meets the spirit world.

Psychic Kids, Paranormal State, Haunting Evidence—these and countless other television shows are making believers out of millions of people: Ghosts exist, and they’re living right beside us. For centuries, individuals have been trying to prove the existence of ghosts. But without hard evidence, it’s been difficult to make the case. But now as science and technology have progressed, ghost hunters have been able to use scientific means, along with more traditional psychic tools, to make their case. Photographs, video recordings, and sound recordings are all producing some amazing results.

In this new series, Ghost Huntress, meet Kendall Moorehead, a seemingly typical teen. When her family moves from Chicago to the small historical town of Radisson, Georgia, her psychic abilities awaken. She’s hearing, feeling, and seeing things that seem unbelievable at first, but with the help of the town psychic, Kendall is able to come to terms with her newly emerging gift. So, together with her new BFF, Celia, Kendall forms a ghost hunting team. They’ve got all the latest technology. They’ve got Kendall for their psychic. Now they’re going to clean up Radisson of its less savory spirits.

The story is fiction. The science is real. Welcome to a new reality.

I've always loved a good ghost story and I watch Ghost Hunters all the time, so I was really looking forward to reading this one. I really enjoyed it. Kendall is a great character. It's hard enough to fit into a new town and a new school, at the same time, Kendall has to deal with her growing psychic abilities. She's hearing voices for one thing, which leads her super-religious mother to suspect that she is either schizophrenic or communing with the devil.

Her new friend Celia is a genius with an unlimited Amex, with which she can purchase endless ghost hunting gadgets. And then there's Taylor, the popular girl whose popular has recently taken a hit, and Taylor's overprotective brother, Jason. When Jason stops being a jerk, Kendall starts to notice that he's actually quite dreamy.

When a ghost starts to threaten Kendall's Dad while he's working in his office, the Ghost Huntresses go to work to solve the mystery and help rid Radisson of one hateful spirit.

This book has all of the elements I was looking for. It's got a good ghost story, with fun, witty dialogue, and it incorporates all of the science of ghost hunting that I've become familiar with through watching shows like Ghost Hunters. Plus there's a little romance thrown in.

It was just a lot of fun to read and I can't wait for the next book in the trilogy, Ghost Huntress: The Guidance.
Posted by Carrie at 12:01 AM