Emily the Strange: The Lost Days by Rob Reger and Buzz Parker 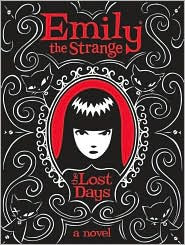 13 Elements you will find in the first Emily the Strange novel:

Emily the Strange: 13 years old. Able to leap tall buildings, probably, if she felt like it. More likely to be napping with her four black cats; or cobbling together a particle accelerator out of lint, lentils, and safety pins; or rocking out on drums/ guitar/saxophone/zither; or painting a swirling feral sewer mural; or forcing someone to say "swirling feral sewer mural" 13 times fast . . . and pointing and laughing.

Last winter, a lot of information started to come out about the similarities between Emily and a character named Rosamond from the Nate the Great series. There's a blog post about it here. I never read Nate the Great, but I have to admit that the two pictures on the blog are pretty similar. There was a lot of talk throughout the blogosphere, but I don't know what ever came of it all.

Anyway, I just think it's interesting that Emily's first full length novel is coming out amidst all of the fallout. I've always been an Emily fan. I love the art and her snarky little self. So, when I saw this ARC at work, I immediately picked it up for future reading.

It reads pretty quickly. The story is interspersed with Emily's familiar black, white, and red illustrations. Basically, the idea is that Emily wakes up in an unfamiliar place and she has amnesia. She has no recollection of who she is or why she is in the strange town of Blackrock. The book is Emily's journal entries as she tries to solve the mystery of the town and of her self.

It's definitely interesting. It's full of crazy characters and even crazier occurrences. I got into it right away, but in the middle it started to lose me a little. It picks back up though and is worth sticking with. Emily is as angry and rebellious as ever and if you are a fan of the Emily the Strange phenom, then you won't be disappointed.

I believe that the authors plan on writing a series of these books and I will be checking out the rest of them. Is it the best book I've ever read? No, but it was fun and unique which goes a long way for me.
Posted by Carrie at 12:01 AM