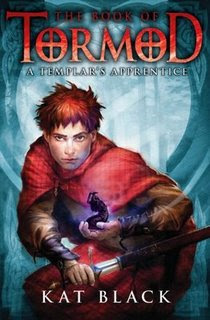 First of all, sorry if this showed up like a million times on your Dashboard, but apparently I keep hitting the Enter button. So forgive me. This time is for real. This is what happens when I workout with my Wii EA Active for too long. My body no longer works.

So here is the review.

Scotland. 1307. Thirteen-year-old Tormod MacLeod is different. He knows things before they happen. Even his own brother treats him differently, and all Tormod can do is bide his time until he's old enough to leave the village and make something of himself. His chance comes sooner than expected when a Templar knight asks him to deliver a secret message. But Tormod's efforts end up endangering both their lives. What follows is a desperate journey to escape the army of King Philippe le Bel of France. If he is to survive, Tormod must learn to harness the powers within.

When I was asked to review this book, the first thing that caught my attention was Scotland. I love books about Scotland and Ireland, seeing as how my family came from both (along with about a million other places). Tormod, the main character, captured my attention from the first page. He's such an earnest character with a clear and honest voice. You can feel how conflicted he is about his gift and about sharing it with others.

The action takes off at the end of the first chapter, when the Templar knight appears, and doesn't let up throughout the entire book. What follows the knight's appearance is a race against time to far distant shores. Their journey is full of strange powers, visions, near death experiences, and a few....well what can only be called, Jedi mind tricks. All the while, Tormod, and the weary crew of Templar knights are chased by evil forces who are out to destroy the one thing they need to protect.

It was a fun and fascinating read. I got to learn about the Templars right along with Tormod. It's incredibly action-packed and ends with a complete cliffhanger which, of course, has me anxiously awaiting the sequel. Do these authors know what they're doing to us with all these cliffhangers?!

This book made me want to check out some of those other adventure-type series that I've been passing up in the bookstore. Has anyone read the Ranger's Apprentice series? Or can you recommend some others?

Back on point, I recommend Tormod to anyone who likes fantasy, adventure stories, or classic tales of good vs. evil. This series is very promising as is the author, Kat Black.
Posted by Carrie at 12:01 AM