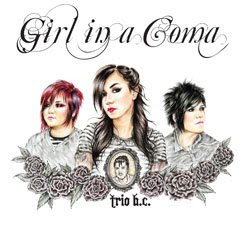 I just found out the Tori Amos is coming to Kansas City in July. Hells yeah!! I can't wait. I'll see Tori in July, Kathy Griffin in August and U2 in October. Woo hoo!! Plus, Girl in a Coma (pictured left)has a new CD coming out in June, which I'm very excited about.

As some of you know, I work in a bookstore and today, we received Once Bitten, Twice Shy by Kim Harrison, which I reviewed here. We also received Hunger by Michael Grant, which I haven't read yet, but plan to. They are both in cardboard displays, so if you go to your local bookstore, take a look around. They aren't officially released until next week, so some stores may not have them out.

We also got Strange Angels this week, too, which I reviewed here.

Head on out to your bookstore and find these awesome reads!!
Posted by Carrie at 9:06 PM