The Awakening by Kelley Armstrong 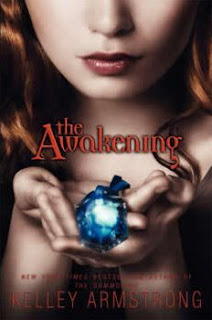 If you had met me a few weeks ago, you probably would have described me as an average teenage girl—someone normal. Now my life has changed forever and I'm as far away from normal as it gets. A living science experiment—not only can I see ghosts, but I was genetically altered by a sinister organization called the Edison Group. What does that mean? For starters, I'm a teenage necromancer whose powers are out of control; I raise the dead without even trying. Trust me, that is not a power you want to have. Ever.

Now I'm running for my life with three of my supernatural friends—a charming sorcerer, a cynical werewolf, and a disgruntled witch—and we have to find someone who can help us before the Edison Group finds us first. Or die trying.

Kelley Armstrong has delivered another solid book in her Darkest Powers series. The Awakening is fantastic! I think it's even better than the first book, The Summoning. I've been a fan of Armstrong's writing since the beginning. Her Women of the Otherworld books, which starts with Bitten, are one my favorite adult paranormal series. I highly recommend those books, if you like these.

This series takes place in the same world as her other titles, but deals with a group of teenagers who are thrown together in a group home for troubled teens. Only problem, these teens aren't troubled, at least not in the classic sense. They are paranormal. Each teen is discovering their own paranormal talent/curse. All the while, they are running from those who put them in this group home. A group who is not out to help these kids, but rather to harm them.

I love the characters in these books. They are all struggling to understand their own powers, while at the same time trying to find answers and a safe place to stop running. I think Chloe is incredible and my other favorite character is Derek. What can I say, I love a lycan. Werewolves are my paranormal creature of choice, so I can't wait to see how his character develops in the future.

When I read the last page of this book, I literally squealed and whined, because now I have to wait who knows how long for book three. It's absolute torture. I want it now!! If you haven't picked up this series yet, run right out and get it. You won't be sorry.

I plan on traveling about 8 hours to the Naperville, IL stop on the Supernatural Summer Tour. Kelley Armstrong will be there, along with Kim Harrison and Melissa Marr. Three amazing authors at one signing. I will probably pass out. I can't wait to meet these fantastic ladies. Is anyone else planning on hitting any stops on the tour?
Posted by Carrie at 7:37 PM