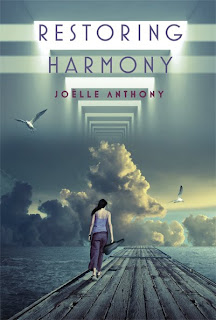 The year is 2041, and for sixteen year old Molly McClure, her life now is pretty much the same as it’s always been. She was only six when The Collapse of ’31 happened, ending life as the world’s population had known it. For grown-ups everywhere, the changes in their daily routines since The Collapse are a constant source of anxiety and worry. Not to mention bitterness at what they feel they’ve been cheated out of; abundant food and goods, ease of travel and communication, and financial security.

In Molly’s opinion, adults spend way too much time talking about the good old days. Sporadic electricity, bicycles, horses, solar powered tractors, sewing, cooking and farm work are all Molly’s ever really known, so she doesn’t waste a lot of energy worrying about what things used to be like. Life after The Collapse is just normal for her. At least until she finds herself forced to leave the comfort of her home and small island in British Columbia to travel down to Oregon.

What starts out as a quick trip to the United States to convince her grandfather to come back to Canada and be the island’s doctor, turns into a rescue mission, a test of Molly’s strengths, ingenuity, and sheer determination. She faces an unknown world where people are hungry, desperate, and sometimes even ruthless. But she also meets many helpful people, makes new friends, and is tested in ways she couldn’t have imagined.

Will a farm girl like Molly survive in this upturned world? Will she be able to return with her grandpa in time for him to help her ailing mother? And just how much will she have to compromise to succeed in getting back to British Columbia with her grandparents?

Find out in RESTORING HARMONY by Joëlle Anthony, forthcoming from Putnam Books for Young Readers

This sounds AMAZING!!! Post-Apocalyptic fiction is one of my fave genres and this sounds right up my alley. I can't wait!! Unfortunately it doesn't come out until May? Torture!! I also adore the cover. It makes me think of some of Charles De Lint's book covers.
Posted by Carrie at 8:30 PM