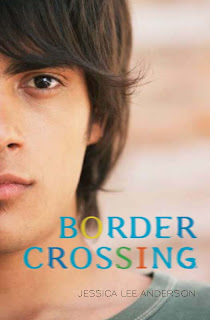 Manz lives on the wrong side of the tracks in dusty Rockhill, Texas. Life is tough for everyone there--his hard-drinking mother, her truck-driving boyfriend, even his privileged friend Jed. Manz just wants to get out of the house and away from his unpredictable mother. But there's another problem--he's hounded by voices, and they're growing louder by the day.

When Manz takes a summer job at a cattle ranch, he meets Vanessa, who might be able to help. But Manz doesn't know if he can trust her. In fact, he doesn't know if he can trust anyone. He's seen Border Patrol rounding up illegals, and the voices say he might be next. When Manz begins to see signs of Operation Wetback--a brutal deportation scheme from the 1950s--he knows it's only a matter of time before they come for him.

As the summer heat thickens, Manz begins to seek guidance from the voices that mock and counsel him. Can he figure out which voice to listen to before it's too late?

Jessica Lee Anderson has written an incredibly powerful book that will stay with you long after you turn the last page. Manz is a heartbreaking character; he's one of those guys that just never seems to catch a break. When it comes to the relationship between Manz and his mother, Manz has to play the adult. And the one adult he can count on, Tom, his mother's boyfriend, is always out on the road. His best friend Jed has his own issues at home and is blind to Manz' struggles.

I felt sympathy for all of the characters in this book. His mother, although an alcoholic, has her own dark demons to deal with. I couldn't help but feel for her even as she was letting her son down.

I've read books about mental illness before, but it was truly fascinating to see it from the inside out. Anderson does a wonderful job of putting the reader into the mind of Manz. The writing helps the tension grow, so that the reader starts to feel just as paranoid as Manz. I couldn't help but look over my own shoulder to see if the Border Patrol was coming for me.

This was just a really great read and an engrossing look at an average teenager who is thrust into the very difficult world of Schizophrenia and is just trying to escape. Definitely a recommended read!!
Posted by Carrie at 8:12 PM