Magic Under Glass by Jaclyn Dolamore 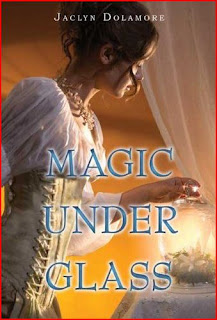 What a truly lovely book. I've read a few not so glowing reviews, but this book just really captured my heart and my attention from page one. I was instantly swept away into Nimira's world of "Trouser Girls," magic, and gentlemen. All of Dolamore's characters were very well-written and made for an intriguing tale of love, power, and revenge.

I loved Nimira and Erris' story and found myself cheering for them from the get-go. Hollin Parry's story was also fascinating in that whole Jane Eyre kind of way. He was one of those tragic characters that I couldn't help but feel for.

The way this book ended, I really feel like a sequel is imminent and that excites me very much. Dolamore has written such a lovely and lyrical book, that was at the same time a quick and fun read. There was some truly beautiful imagery in this book and I really felt like I was immersed in Nimira's world while reading these pages.

These early tenners are really setting this up to be a great year. I can't wait to see what's in story as 2010 rolls on.
Posted by Carrie at 6:52 PM