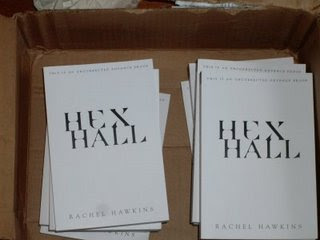 The only photo I could find is from Rachel Hawkins' blog and it's of the ARC, which I assume is not the final cover.

Three years ago, Sophie Mercer discovered that she was a witch. It's gotten her into a few scrapes. Her non-gifted mother has been as supportive as possible, consulting Sophie's estranged father-an elusive European warlock-only when necessary. But when Sophie attracts too much human attention for a prom-night spell gone horribly wrong, it's her dad who decides her punishment: exile to Hex Hall, an isolated reform school for wayward Prodigium, a.k.a. witches, faeries, and shapeshifters.

By the end of her first day among fellow freak-teens, Sophie has quite a scorecard: three powerful enemies who look like supermodels, a futile crush on a gorgeous warlock, a creepy tagalong ghost, and a new roommate who happens to be the most hated person and only vampire on campus. Worse, Sophie soon learns that a mysterious predator has been attacking students, and her only friend is the number-one suspect.

As a series of blood-curdling mysteries starts to converge, Sophie prepares for the biggest threat of all: an ancient secret society determined to destroy all Prodigium, especially her.

I think this book sounds amazing and I believe it's the first book in a series, which, of course, I love. It doesn't come out for a realllllly long time, but I will be eagerly awaiting its release. Can't wait to see what everyone else is waiting on this week.

Waiting on Wednesday is brought to you by Jill over at Breaking the Spine.
Posted by Carrie at 7:16 PM