Another slooooooow week in my little ol' mailbox. The books have ceased rollin' in lately, but that's okay, because I still have lots and lots to read and review. As always, In My Mailbox is brought to you by Kristi, AKA The Story Siren.

Only two books this week:

ARC I picked up at work (last week, so I grabbed it): 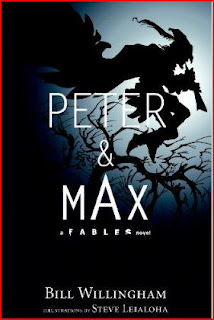 This story stars Peter Piper and his incorrigible brother Max in a tale about jealousy, betrayal and revenge. Set in two distinct time periods, prepare to travel back to medieval times and learn the tragic back-story of the Piper family, a medieval-era family of traveling minstrels. Then, jump into the present to follow a tale of espionage as Peter Piper slowly hunts down his evil brother for a heinous crime, pitting Peter's talents as a master thief against Max's dark magical powers.

Based on the long-running and award-winning comic book series FABLES, PETER AND MAX is its own tale. Readers don't have to be familiar with the comics to fully enjoy and understand this book.

I love the comic book Fables, so I was super psyched when this showed up at work. It's the first "prose" novel being released by Vertigo/DC Comics, so yay!! Looks great. I highly recommend the comics for anyone who is interested. They are fantastic. For fans of Max Brooks’s The Zombie Survival Guide and zombie aficionados everywhere, a hilarious debut novel about life (and love) after death.

Meet Andy Warner, a recently deceased everyman and newly minted zombie. Resented by his parents, abandoned by his friends, and reviled by a society that no longer considers him human, Andy is having a bit of trouble adjusting to his new existence. But all that changes when he goes to an Undead Anonymous meeting and finds kindred souls in Rita, an impossibly sexy recent suicide with a taste for the formaldehyde in cosmetic products, and Jerry, a twenty-one-year-old car-crash victim with an exposed brain and a penchant for Renaissance pornography. When the group meets a rogue zombie who teaches them the joys of human flesh, things start to get messy, and Andy embarks on a journey of self-discovery that will take him from his casket to the SPCA to a media-driven class-action lawsuit on behalf of the rights of zombies everywhere.

Darkly funny, surprisingly touching, and gory enough to satisfy even the most discerning reader, Breathers is a romantic zombie comedy (rom-zom-com, for short) that will leave you laughing, squirming, and clamoring for more.

I received this one from Velvet at vvb32 reads, for the September Zombies Week she created and I, along with a few other zombie-loving bloggers are taking part in. Thanks so much Velvet and she also sent me an awesome zombie sticker that says "Zombies are People Too," which I totally agree with. I'll be reading this one to review during our Zombie spectacular, so stay tuned for more with the deliciously undead.

That's it for me this week. Sorry this is late, but I've been busy with my last day at Barnes & Noble celebrations, lunch with my grandparents today, and reading Ballads of Suburbia. I promise to have a review of something up sometime tomorrow.