As always, In My Mailbox is brought to you by Kristi, AKA The Story Siren. She rocks, so you should go check her out.

Another sloooooow week for me. I only got two books in the mail, but I'm looking forward to both of them.

The Selected Works of T. S. Spivet by Reif Larson 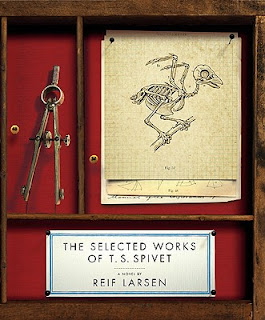 T.S. sets out alone, leaving before dawn with a plan to hop a freight train and hobo east. Once aboard, his adventures step into high gear and he meticulously maps, charts, and illustrates his exploits, documenting mythical wormholes in the Midwest, the urban phenomenon of "rims," and the pleasures of McDonald’s, among other things. We come to see the world through T.S.'s eyes and in his thorough investigation of the outside world he also reveals himself.

As he travels away from the ranch and his family we learn how the journey also brings him closer to home. A secret family history found within his luggage tells the story of T.S.'s ancestors and their long-ago passage west, offering profound insight into the family he left behind and his role within it. As T.S. reads he discovers the sometimes shadowy boundary between fact and fiction and realizes that, for all his analytical rigor, the world around him is a mystery.

All that he has learned is tested when he arrives at the capital to claim his prize and is welcomed into science’s inner circle. For all its shine, fame seems more highly valued than ideas in this new world and friends are hard to find.

T.S.'s trip begins at the Copper Top Ranch and the last known place he stands is Washington, D.C., but his journey's movement is far harder to track: How do you map the delicate lessons learned about family and self? How do you depict how it feels to first venture out on your own? Is there a definitive way to communicate the ebbs and tides of heartbreak, loss, loneliness, love? These are the questions that strike at the core of this very special debut.


Everything Sucks by Hannah Friedman 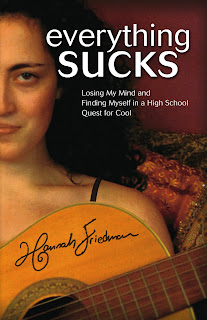 "By my senior year [in high school] I am the chair of the student body and disciplinary committee, coordinator of 3 community service programs, I have a 4.0 GPA, a millionaire boyfriend with a BMW, and finally, for the first time in my entire life, I am considered 'cool.' But when an article of mine about the college admissions process is published in Newsweek, everything I've worked so hard to achieve is pulled out from under me...and I resolve once and for all to stop allowing other people to define me."

Welcome inside the head of 21-year-old Hannah Friedman--a fresh new author whose biting wit and captivating writing style is a cross between bestselling YA author Anne Brashares (The Sisterhood of the Traveling Pants) and the hysterically honest Amy Sedaris (I Like You: Hospitality Under the Influence).

Everything Sucks details the teenage years in all of their cringe-worthy absurdity--from getting home schooled in a tour bus with hippie musicians to attending one of New York's most prestigious private schools on full scholarship to developing a drug addiction and eating disorder to nearly getting kicked out of Yale University before she even gets to attend. In the end, it's Friedman's spirit that keeps her afloat.

Needless to say, I enjoyed The Warrior Heir, so I had to run out today and pick up the next two. I'm not sure when I'll get to them, but, of course, I had to have them.

Blue Moon by Alyson Noel
I can't wait to read this one, but there are many books in front of it, so it'll sit for a little while.

So that's it for me this week. Two slow weeks in a row, but that's okay. I definitely don't have a shortage of things to read.

Can't wait to see what everyone else got this week.
Posted by Carrie at 9:34 PM