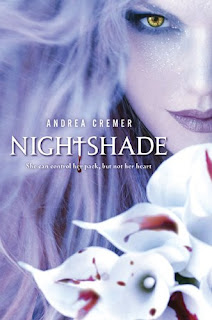 Calla Tor has always known her role: as soon as she graduates from the Mountain School, she will become the mate of sexy alpha wolf Ren Laroche and fight with him, side by side, ruling their pack and guarding sacred sites for the keepers. However, Calla is steered away from her destiny--and the unassailable laws of her masters--when she rescues a beautiful human, Shay. Calla is suddenly torn between her previously unquestioned fate and her natural attraction to Ren, and her growing desire to know more about the mysterious Shay. Following that desire is dangerous, however--and Calla might lose everything she holds dear. Even her own life. Is forbidden love worth the ultimate sacrifice?

This book is being touted as the next big thing in YA literature. In many cases, when I hear something is the "next big thing," it fails to live up to the hype. That is so not the case with Nightshade. I picked this book up pretty much immediately after receiving it in the mail and I devoured it very quickly. It's a fantastic read and one of the best paranormals, YA nor not, that I've read in a long time. Just when I think I'm getting tired of the genre, Andrea Cremer comes onto the scene and pulls me back in.

From page one, I was swept into Calla's story. I've always been a werewolf fan, but Cremer puts a whole new spin on the mythology and gives us a kickass heroine who I would follow anywhere. Calla is amazing, tough, and no-nonsense, but she cares so deeply about the people around her that it's her heart that really drew me in. Cheesy, I know, but true.

There's an amazing cast of characters throughout the book. I almost wish I'd waited to read it, because now I have to wait that much longer for the second book. Argh, what was I thinking? Secrets are revealed, but only enough to keep you chomping at the bit for book two. This is what great series are made of, and if the next two books are as good as this one, then this will indeed be the "next big thing." Thank you Andrea Cremer, for making paranormal new again!
Posted by Carrie at 10:31 PM