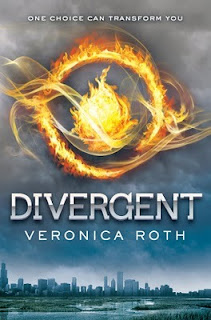 In Beatrice Prior's dystopian Chicago, society is divided into five factions, each dedicated to the cultivation of a particular virtue—Candor (the honest), Abnegation (the selfless), Dauntless (the brave), Amity (the peaceful), and Erudite (the intelligent). On an appointed day of every year, all sixteen-year-olds must select the faction to which they will devote the rest of their lives. For Beatrice, the decision is between staying with her family and being who she really is—she can't have both. So she makes a choice that surprises everyone, including herself.

During the highly competitive initiation that follows, Beatrice renames herself Tris and struggles to determine who her friends really are—and where, exactly, a romance with a sometimes fascinating, sometimes infuriating boy fits into the life she's chosen. But Tris also has a secret, one she's kept hidden from everyone because she's been warned it can mean death. And as she discovers a growing conflict that threatens to unravel her seemingly perfect society, she also learns that her secret might help her save those she loves . . . or it might destroy her.

I was completely blown away by this book. I had heard all of the hype from various sources comparing it the The Hunger Games, so when I got the book in the mail, I was almost weary of reading it. I didn't want to be disappointed, nor did I want to read a carbon copy of Hunger Games. I'm so happy that I gave Divergent a chance.

It's a beautifully written book, first of all. Roth has created such a vivid dystopian landscape that while reading it, I almost expected to wake up and have to choose my faction. From page one I was drawn into the world she'd created and into the life of Tris. Tris is such a fantastic character and it was amazing to see her grow as she works her way through this whole new experience. As the reader, I just wanted so much to see her succeed and I almost wanted to jump in there and start working alongside her.

I love dystopias and with so many coming out on the market, it is hard to find an original idea and to create an original world, but Roth has done that and more. Will there be comparisons to The Hunger Games? Of course, and there were moments when I was reminded of Katniss, but this book is so much more than that. I can't wait for the next book in the series. Tris' world is dark, violent, and more than a little scary, but I would gladly return there again and again.
Posted by Carrie at 8:21 PM