Moon Over Manifest by Clare Vanderpool 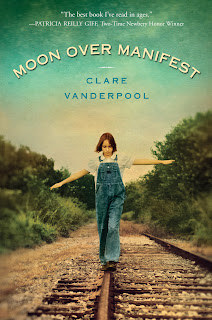 Source: Checked out from school library.

The movement of the train rocked me like a lullaby. I closed my eyes to the dusty countryside and imagined the sign I’d seen only in Gideon’s stories: Manifest—A Town with a rich past and a bright future.

Abilene Tucker feels abandoned. Her father has put her on a train, sending her off to live with an old friend for the summer while he works a railroad job. Armed only with a few possessions and her list of universals, Abilene jumps off the train in Manifest, Kansas, aiming to learn about the boy her father once was.
Having heard stories about Manifest, Abilene is disappointed to find that it’s just a dried-up, worn-out old town. But her disappointment quickly turns to excitement when she discovers a hidden cigar box full of mementos, including some old letters that mention a spy known as the Rattler. These mysterious letters send Abilene and her new friends, Lettie and Ruthanne, on an honest-to-goodness spy hunt, even though they are warned to “Leave Well Enough Alone.”

Abilene throws all caution aside when she heads down the mysterious Path to Perdition to pay a debt to the reclusive Miss Sadie, a diviner who only tells stories from the past. It seems that Manifest’s history is full of colorful and shadowy characters—and long-held secrets. The more Abilene hears, the more determined she is to learn just what role her father played in that history. And as Manifest’s secrets are laid bare one by one, Abilene begins to weave her own story into the fabric of the town.

Powerful in its simplicity and rich in historical detail, Clare Vanderpool’s debut is a gripping story of loss and redemption.

I'm trying to be better about reading the award books, so I can share them with my students, so when this book was announced as the Newbery winner, I immediately checked it out. First of all, I have to admit, I love stories that take place during the Great Depression. My grandparents are in their late 80's, so I grew up hearing about their lives during the depression. They had two vastly different experiences during that time, so I feel like I've grown up with both sides of the story. Every time I read a book that takes place in the '30's, I feel like I'm sitting with my grandparents and listening to them reminisce.

This was an amazing book. I really can't praise it highly enough. I can see why it was chosen this year, and the Newbery title is well-deserved. It's hard to believe this is Vanderpool's first book, because the storytelling is incredible, the characters are so real, and the history is flawless. I'm a big fan of the writer Fannie Flagg, who wrote Fried Green Tomatoes at the Whistle Stop Cafe,and this book really had the same feel to me. It's just an honest story about life in a small town where everyone knows everyone's secrets, and yet they really don't know one another at all.

If you want a great story with a huge helping of heart, then check this one out. I can't wait to see what Vanderpool comes up with next, but I'd be perfectly content if she just returned to Manifest again and again.
Posted by Carrie at 10:40 PM