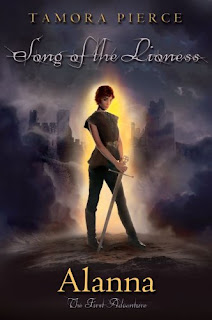 Release Date: Ummmm, yeah....this has been out since '83, but I'm just now hopping on board. Currently available from Atheneum.

"From now on I'm Alan of Trebond, the younger twin. I'll be a knight."

And so young Alanna of Trebond begins the journey to knighthood. Alanna has always craved the adventure and daring allowed only for boys; her twin brother, Thom, yearns to learn the art of magic. So one day they decide to switch places: Disguised as a girl, Thom heads for the convent; Alanna, pretending to be a boy, is on her way to the castle of King Roald to begin her training as a page. But the road to knighthood is not an easy one. As Alanna masters the skills necessary for battle, she must also learn to control her heart and to discern her enemies from her allies. Filled with swords and sorcery, adventure and intrigue, good and evil, Alanna's first adventure begins -- one that will lead to the fulfillment of her dreams and make her a legend in the land.

I'm a little late hopping on the Tamora Pierce bandwagon and I'm not sure what finally made me decide to read her books, but I started at the beginning. My first foray into the world of Tortall was Alanna, book one in the Song of the Lioness quartet.

I've never considered myself a fantasy fan, although I don't know why, because I've read my fair share. This book, though, captured me from the very beginning and made me wonder why I waited so long. The character of Alanna really made this book for me. She's so strong and self-assured and yet has some of the same fears and faults that we all do. She's incredibly likable, because I saw in her some of the courage that I wish I'd had at that age, and really, that I wish I had now.

Pierce's world is flawless. Everything just moves so smoothly from page to page, chapter to chapter, and before I knew it, the book was done and I was hungry for more. I finished all four books and each one instantly became my favorite.

If you haven't read the Song of the Lioness books, I urge you to do so. Even if you don't consider yourself a fantasy fan, this book would appeal simply because of the beautiful writing and the masterful characterization. And Alanna totally kicks ass!