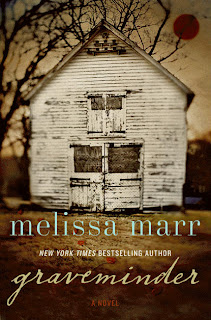 The New York Times bestselling author of the Wicked Lovely series delivers her first novel for adults, a story about the living, the dead, and a curse that binds them.
Rebekkah Barrow never forgot the tender attention her grandmother, Maylene, bestowed upon the dead of Claysville, the town where Bek spent her adolescence. There wasn't a funeral that Maylene didn't attend, and at each Rebekkah watched as Maylene performed the same unusual ritual: three sips from a small silver flask followed by the words "Sleep well, and stay where I put you."

Now Maylene is dead and Bek must go back to the place--and the man--she left a decade ago. But what she soon discovers is that Maylene was murdered and that there was good reason for her odd traditions. It turns out that in placid Claysville, the worlds of the living and the dead are dangerously connected. Beneath the town lies a shadowy, lawless land ruled by the enigmatic Charles, aka Mr. D--a place from which the dead will return if their graves are not properly minded. Only the Graveminder, a Barrow woman, and the current Undertaker, Byron, can set things to right once the dead begin to walk.

I love Melissa Marr's Wicked Lovely series, so it was a no-brainer when it came to buying her first adult release. This was a good way for Marr to enter into the adult market, but I have to say, I didn't like it quite as much as her YA books. It was a good book and I enjoyed it, but what I enjoyed was how the voice was so reminiscent of her YA series. I could totally tell I was reading a Melissa Marr book from page one and I liked that about the book.

It's a completely different look at the zombie novel. It has a lot more humanity than your average zombie novel. It's a really original idea and a realm of paranormal that hasn't been done yet. These are all things I did love about Graveminder.

Now, what didn't I love? It started off really strong. I read at least half of it in one sitting, but them it seemed to flatten out a little in the middle. It did pick up in the end, but by then, the ending felt a little rushed.

Overall, though, I did enjoy it. I mean, it's Melissa Marr. I'm always going to show up for anything Marr has to offer. I just wanted a little more, but I know she'll totally bring it next time.
Posted by Carrie at 9:49 PM