Waiting on Wednesday (63)--Wicked Girls: A Novel of the Salem Witch Trials by Stephanie Hemphill 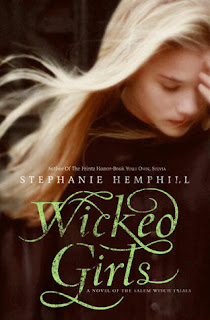 Wicked Girls is a fictionalized account of the Salem witch trials based on the real historical characters, told from the perspective of three young women living in Salem in 1692—Mercy Lewis, Margaret Walcott, and Ann Putnam Jr.


When Ann’s father suggests that a spate of illnesses within the village is the result of witchcraft, Ann sees an opportunity and starts manifesting the symptoms of affliction. Ann looks up to Mercy, the beautiful servant in her parents' house. She shows Mercy the power that a young girl is capable of in a time when women were completely powerless. Mercy, who suffered abuse at the hands of past masters, seizes her only chance at safety. And Ann’s cousin Margaret, anxious to win the attention of a boy in her sights, follows suit. As the accusations mount against men and women in the community, the girls start to see the deadly ramifications of their actions. Should they finally tell the truth? Or is it too late to save this small New England town?

I've always been fascinated by the Salem Witch trials, so I am anxiously awaiting this one. It looks fantastic and I love the cover.
Posted by Carrie at 9:09 PM