Magickeepers, Book Two: The Pyramid of Souls by Erica Kirov 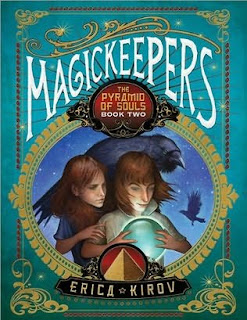 It was stolen from Alexander the Great. To keep it safe, Edgar Allen Poe bargained away his sanity. And somebody suckered P. T. Barnum to get their hands on it. It's the most closely guarded secret in the magician community. And it's missing.

What would you do to protect your family from an ancient pyramid capable of stealing your very soul?

Nick Rostov finally has the life he's always dreamed-and he'll do anything to protect it.

Nick has only now discovered he is part of an extended Russian family of magicians: the Magickeepers. He lives with his eccentric new relatives at the Winter Palace Hotel and Casino in Las Vegas, where they perform daring feats of magic to a packed house. Real magic.

But Nick and his family face a new danger in the form of a stolen relic, the Pyramid of Souls. The tiny pyramid has traded hands many times throughout history. Its power can steal a magician's very soul.

Nick knows who took it: Rasputin, leader of the Shadowkeepers. Using his unique ability as a Gazer-one who can see into the past-Nick enlists his cousin Isabella to help him find it. Soon, the two are hot on the evil sorcerer's trail...until Isabella's soul is trapped by the very relic they're trying to find.

Nick will do anything to rescue Isabella and recover the Pyramid of Souls. But will it be enough to save his family?

Usually I'm really anal about reading series in order, because I hate to feel like I'm playing catch up when I start a book. It's hard as a review blogger, though to find the time to go back and start a series from book one. There just aren't enough hours in the day. So, I really love it when a book can stand on its own two feet and is a complete story in and of itself. Enter The Pyramid of Souls by Erica Kirov. At no time while reading this little gem of a novel did I feel lost or out of touch with what was happening. It was oh so easy to just dive in and get to know the characters as they experienced their own adventures. Thank you Erica Kirov!!

This is a great book. It's written for a more middle grade audience, but I think it would appeal to anyone. It's got a wonderful blend of magic, history, and adventure that kept me turning the pages. It's also set in Las Vegas, a city that I love, so that added to my enjoyment. I could totally see the Winter Palace Hotel and Casino blending in perfectly with the over-the-top Vegas skyline. I think this magical family would feel right at home in the world of Caesar's Palace, Sigfried & Roy, and Circus Circus.

Kirov has created a wonderfully believable magical world with a likable hero, Nick Rostov. Nick's really wants to fit in with his newfound extended magical family, but that's hard to do when you are dodging some evil magicians and trying to perfect your magic for the casino's big show at the same time.

This was a quick read that I truly enjoyed. I'm looking forward to finding the time for the first book in the series. I'll be adding these titles to my school library shelves in the fall. I think the kids will totally dig them.
Posted by Carrie at 9:59 PM