This World We Live In (The Last Survivors, Book 3) by Susan Beth Pfeffer 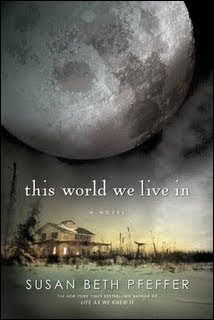 It's been a year since a meteor collided with the moon, catastrophically altering the earth’s climate. For Miranda Evans life as she knew it no longer exists. Her friends and neighbors are dead, the landscape is frozen, and food is increasingly scarce.

The struggle to survive intensifies when Miranda’s father and stepmother arrive with a baby and three strangers in tow. One of the newcomers is Alex Morales, and as Miranda’s complicated feelings for him turn to love, his plans for his future thwart their relationship. Then a devastating tornado hits the town of Howell, and Miranda makes a decision that will change their lives forever.

I have to start by saying that this is one of my favorite series of all time. There's just something about these books that immediately captured not just my attention, but my heart as well. I think that something was Miranda. She's one of the most honest and raw characters in literature (YA or otherwise) today. She's completely average, flawed and human, and at times a little selfish, just like all the rest of us. However, unlike us, Miranda is faced with unspeakable horrors and loss. How she deals with the cards she's been dealt is the story that is truly at the heart of this series.

I know, I know, it's not all about Miranda, after all, book 2 is Alex' story, but Miranda's the character that sticks with me the most, even when reading someone else's tale. To see these two people come together and create an entirely new story was really wonderful. I think there was always that chance that bringing these two together from their vastly different worlds would've felt forced, but that in no way happens here. Pfeffer seamlessly blended the two stories together into what may be the most powerful book of the series.

My sister didn't even make it halfway through book 1. She felt like it was too sad, too depressing, but I feel just the opposite. I think these books are full of heart and hope. I like the idea that even in the darkest of times, people will find a way to carry on and create their own future.

The only thing I don't like about this book is that I believe it's the last time we'll enter this world. I'm hoping that Pfeffer wants to continue the story, because I definitely want to continue reading.

By the way, I just found out that Pfeffer will be accepting an award at the Spring Conference for MASL (Missouri Association of School Librarians), which I will be attending in April. I can't wait. It's so exciting to think that I'm going to get to me her. Woo hoo!!
Posted by Carrie at 8:12 PM