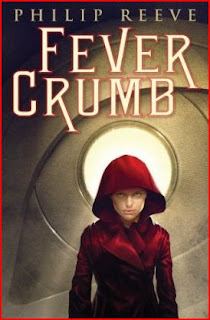 
Fever Crumb is a girl who has been adopted and raised by Dr. Crumb, a member of the order of Engineers, where she serves as apprentice. In a time and place where women are not seen as reasonable creatures, Fever is an anomaly, the only female to serve in the order. Soon though, she must say goodbye to Dr. Crumb-nearly the only person she's ever known-to assist archaeologist Kit Solent on a top-secret project. As her work begins, Fever is plagued by memories that are not her own and Kit seems to have a particular interest in finding out what they are. Fever has also been
singled out by city-dwellers who declare her part Scriven. The Scriveners, not human, ruled the city some years ago but were hunted down and killed in a victorious uprising by the people. If there are any remaining Scriven, they are to be eliminated. All Fever knows is what she's been told: that she is an orphan. Is Fever a Scriven? Whose memories does she hold? Is the mystery of Fever, adopted daughter of Dr. Crumb, the key to the secret that lies at the heart of London?


I love Philip Reeve's Hungry City Chronicles. In fact, I've posted about it before here. This book is a prequel of sorts to this series. It's set hundreds of years before in a world that is just beginning to look like what we see in the Hungry City Chronicles. If you haven't read this series, I can't recommend them highly enough. This is the perfect place to start, too.

Fever Crumb is an amazing character. She's been raised by the Engineers who have shunned any emotions in favor of cold, hard science. She doesn't know anything about her life before the Engineers until she's sent to help an archaeologist who is searching for secrets. Slowly, Fever starts to learn more and more about her past and about who she really is.

It's a fantastic read. Granted, I'm already a fan, and I mean a rabid fan of this series. Even with that being said, this would be a wonderful stand-alone novel. I can't tell you how happy I was to learn that Reeve was returning to this world, but he's gone even further with this book. It's always great to get the back story to a series you love....to learn where this fascinating world grew from. Philip Reeve has given us all a look into the past of the Hungry Cities, and what a past it is. There's adventure and intrigue, and so much action I felt like I was racing through to see what happened next.

Buy these books. It's one of the best series out there. It will capture you and take you away to an incredible post-apocalyptic, dystopian world where you might just catch a glimpse of our future.
Posted by Carrie at 7:43 PM