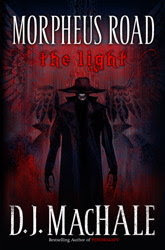 Marshall Seaver is being haunted. Or maybe we should say, hunted, because it was that too. Marsh is left alone to deal with demons both of his own making and those that are reaching out from beyond the grave. Follow this series to outer reaches of reality where the supernatural becomes . . . natural.

I never read MacHale's Pendragon series, but I always thought they looked like something I would like. This series also looks like it'll be right up my alley. I'm pretty excited to give it a try.
Posted by Carrie at 9:24 PM