The Midnight Twins by Jacquelyn Mitchard 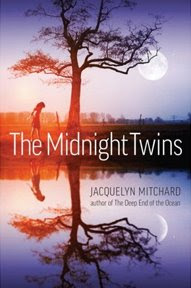 Here's the blurb from the back of the book:

Meredith and Mallory Brynn are mirror twins born on either side of midnight one snowy New Y ear's Eve. They have always been inseparable. But after they are nearly killed in a mysterious fire on their thirteenth birthday, the bond that has always joined them unravels. They begin to have visions and dreams that reveal the deep secrets kept by the people around them. Meredith and Mallory realize they have each been given a gift: Mallory can see deep into the past; Meredith can see the future. But when they discover that one boy is not what they imagined, their lives will be changed forever. If they can survive . . .

Okay, so I have some mixed feelings about this one. I liked it; it kept me reading, but I didn't love it. When I read the first chapter I had high hopes. It had that folk-tale storytelling kind of feel going on and it felt almost like the first time I read Practical Magic by Alice Hoffman. This was no Practical Magic though.

I thought the idea behind the book was very interesting. Twins that see visions, but not the same type of visions. They each see a different side of the same event. It's a very interesting concept and I was intrigued enough to keep reading. I liked the character of the next door neighbor Drew almost more than I liked the girls though. He was much more likable and quite honestly easier to follow.

The book just seemed a little disjointed at times and often I found myself looking back to pick up a thread of the plot or to just try to figure out which twin was talking. It wasn't a bad read by any means, but it wasn't as good as I'd hoped. I'll probably still read the next book in the series just to see where she takes the storyline. Has anyone else read it? What did you think?
Posted by Carrie at 12:40 AM